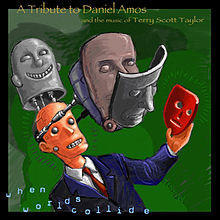 When Worlds Collide is a tribute album to songwriter Terry Scott Taylor. Terry is a masterful and prolific songwriter who is not nearly as well known as he should be! He has been making and recording music since the mid 70s in various bands including Daniel Amos, The Lost Dogs and The Swirling Eddies. His music explores emotional and spiritual themes in a unique and poetic manner. I was very honored to be a part of this tribute album to such a fine songwriter! I contributed my version of “Stone Away” to this compilation album which was originally released in 2000.