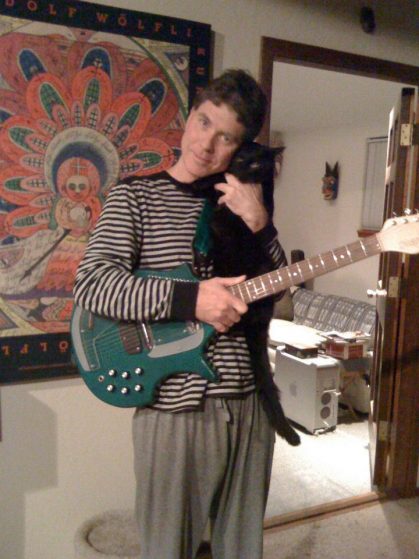 Mikail Graham – On to the Other Side

Lately, my mind and heart have been set spinning by the unexpected and sudden death of my friend Mikail Graham. Of course, it’s impossible to sum up his life or my friendship with him in this little blog post. To say that he was a real giant in our local community would be such be an understatement. His life touched SO many, and my life was enriched by knowing him!! I will try to share a few bits here, specifically about my connection to Mikail in relation to my life as a musical artist.

My wife Juli and I moved to Nevada County in the autumn of 2002. Looking at the local newspaper one day, I saw an article about a CD release concert for Paul Kamm & Eleanore McDonald’s album “Fool’s Paradise” at our local music venue – The Center For the Arts. We were not familiar Paul & Eleanore, but Juli and I were eager to check out local music so we went to the show. We were BLOWN AWAY! It was such a beautiful concert, and we were so moved with Paul & Eleanore’s artistry, vocal blend, and fine songwriting. The evening featured performances by many of the great musicians who played on the album including bassist Rob Bonner, guitarist Steven Holland, pedal steel wizard Pete Grant, and Mikail Graham who played some really great e-bow guitar that night. I have remained a huge fan of Paul & Eleanore’s music ever since.

We ended up taking home a CD copy of “Fool’s Paradise” and discovered that the album was co-produced, mixed, and mastered by Mikail. I was really impressed by the beautiful production. It is such a great record!

Through the years, I would see Mikail perform around town playing many different types of instruments in many genres – but ALWAYS with such artistry and creativity! I would also see him producing shows and at times mixing sound for shows… again always with such class and quality. His long running radio show “The Other Side” on our local radio station KVMR became my absolute favorite! The wild eclecticism of the show could vary from avant-garde free jazz, to Brain Eno, to 70s Krautrock, to obscure 40’s country, and everything in between. Each show had an interesting focus and his DJing/hosting of the show combined crazy wit with lots of heart and soul. His broad eclectic musical tastes paralleled my own.

I had been slowly and steadily working on my first solo album “Soft Sea Creatures” for many years. In early 2014, when I was finally ready to mix this sprawling project, I immediately thought of working with Mikail. I contacted him and was so pleased that he agreed to work with me! So… I then spent many months working with Mikail in his home studio – known as “The Other Studio”.  His approach to mixing was a revelation to me. He thoughtfully collaborated with me on each and every sound and nuance of the recording. He encouraged me to take my time listening to each mix/draft that we created on a variety of different systems, and then come back with any tweaks necessary. I cannot express how much I learned by working on this album with him. I never told him, but I always considered him an important mentor.

When I hired Mikail to mix this record with me, I got SO much more than a mixing engineer! As we listened to the tracks, at times we would conclude that something was missing, and he often skillfully added just the right parts on a variety of instruments. I remember when we were working on the mix of “All Together” I had recorded some bass tracks by a local bassist who was an exceptional player. But listening back… we both were lamenting that the parts were just not feeling right. Frustrated, I took a stretch break in another room in the house. When I came back a few minutes later, there was Mikail with his fretless bass in hand…laying down the perfect track and feel!  I swear, it was only a matter of minutes and we had the perfect track! In so many ways, his imprint is all over “Soft Sea Creatures”.

About a year or so after the album came out, Mikail generously offered to do a special “Other Side” radio show with me focused on the album. The show was entitled “Inspired Collaborators”. We went into the KVMR studio and broadcast the show live, discussing the making of Soft Sea Creatures, playing album tracks and spotlighting many of the great artists who collaborated with me on the sessions. This was big fun! Doing this show with him would be the first of several radio show collaborations we would do together through the years.

Whenever Mikail would see my daughter Mei Lin playing her fiddle, he was ALWAYS so encouraging to her. I think the first time he saw her play was sometime around 2015 when she was 10 years old and just starting to sit in with my band Tumble. He immediately treated her as a fellow musician. Through the years of seeing her develop musically, he would always comment on how good she sounded. I have seen him do the same in his connection to other young local musicians and so greatly appreciate his encouragement for the next generation of musical artists!

In 2018, my band Tumble finished tracking our second album “Waves”. We decided to mix and master this album with Mikail. My bandmate Sean Kerrigan and I spent many nights over at Mikail’s studio working on this project. We had such a great time collaborating with him. He brought some interesting sonic ideas and touches to the record which really complimented the bands’ use of space in our playing and improvisation. Once again, Mikail’s contribution to “Waves” was so much more than just a good mix!

Through the years of friendship with Mikail, I would often call him with random little questions when working on a mix in my home studio or similarly if I had any issues with my Mac computer. There were so many things that he was SO good at, and he was always very generous with his time and attention. He would often give me little tips or suggestions and I cannot count how many times he helped me in these little ways when I was a stuck on a mixing issue or with technology problems in general.

In 2019, when I was putting together the Bob Dylan “Self Portraits” tribute compilation album, I asked Mikail if he would be interested in contributing a track. At first he was unsure, telling me that it would all depend on whether he found something from the list of eligible songs which resonated with him and inspired him. He ultimately ended up covering Dylan’s “Time Passes Slowly”, which Dylan originally recorded during the Self Portrait sessions but did not end up on the album. Dylan later re-recorded this song and it was included on his 1970 album “New Morning”. Mikail told me that he resonated with the lyrics but had an entirely different musical and sonic arrangement in mind. His version of “Time Passes Slowly” really knocked me out. Mikail found such a unique approach to bringing out the deep sense of longing and nostalgia which are in the lyrics. It is one of my favorite tracks on the album and one of my favorite Dylan covers of all time!

Shortly after the release of the Self Portraits CD, Mikail offered to do a special episode of “The Other Side” radio show with me highlighting this project. Bob Dylan’s Self Portrait album was primarily a collection of covers. As such, our album is a cover album of a cover album – a mighty strange concept, perhaps! On the radio show, we took the approach of listening to the original version of the song, listening to Dylan’s version, and then the version by the artist off our album. Laying these diverse versions of these great old songs side by side was an interesting way of approaching this material. I felt so lucky to have a friend who could “geek out” on this sort of thing along with me. It was such a special experience for me to do this Other Side show with him!

Back in May, we had planned to work together on a mix of a new project I was working on. Mikail texted me the day before our session, letting me know that we would need to reschedule as he was having some strange symptoms with his vision which he needed to get checked. I called him a few weeks later to see how he was doing. Things had gone from bad to worse in terms of his symptoms and he was currently under the full time care of his partner, Julie Holmes. We talked about his hopes of getting a diagnosis and his desire to get a handle on his health. He ended the conversation with, “Love you lots, man”. This was the last time I spoke to Mikail.

I heard through social media about two weeks later that Mikail had been diagnosed with Genetic Creutzfeldt-Jakob disease, a very rare neurological disorder, of which there is sadly no cure. Mikail peacefully passed over to “The Other Side” on 7/12/22. I will miss him greatly and am very thankful for the ways in which his friendship touched my life!